Make potato salad with a twist! Use our delicious cashew Caesar dressing to make Caesar potato salad! This delicious vegan side is perfect for summer and is super simple to make.

Whenever anyone asks me what my favorite food is, the answer is always salad. But actually that’s a copout. If I could eat any food for the rest of my life without consequences, it would be potato salad. Literally gallons and gallons of potato salad.

I can’t tell you the number of times I’ve brought potato salad to potlucks, BBQs, and social gatherings. It is without a doubt, the best summer treat. Sometimes, I’ll make a 5 pound batch of it just for me and my boyfriend and I can tell you who eats most of it – yours truly.

Truth be told, I love my recipe for cashew Caesar dressing so much that I couldn’t imagine only pairing it with caesar salad. I had to do more things with it and so this take on the classic was born.

You need one special ingredient

I try not to call for specialized products in my recipes because not only can they be hard to find, but I know not everyone shops at the same grocery stores. Caesar potato salad can definitely be made without this ingredient, but it will affect the overall taste and will be less Caear-y.

The ingredient is: Follow Your Heart parmesan shreds. It really does bring the Caesar part of Caesar potato salad to life. If you can get your hands on some, I strongly recommend doing so. If you happen to come across Go Veggie!’s grated parmesan, that would work as a substitution. Violife’s parm block might work well too, but I’ve never tried to grate it before, so I’m less confident in that as a substitute.

Lastly, if you can’t find any of these vegan cheeses, use some nooch! You might not get the same parm-y goodness, but I know everything tastes great with nutritional yeast.

What ingredients do you need to make Caesar potato salad?

Would you believe me if I said you only need six ingredients to make Caesar potato salad? Well, believe it because it’s the truth baby! The first and most important ingredient is potatoes! I love a good red potato for potato salad. Leave those skins on too and soak up the nutrients. Plus – doesn’t it look much prettier with the purple bits peering through?

The next ingredient you’ll need is a batch of cashew Caesar salad dressing. For Caesar potato salad, you’ll need ¾ cup, which is a little less than half of what the recipe yields. If you’re worried about the ingredients required for the dressing, fear not! All you need are some raw cashews, capers, nutritional yeast, and the rest? You probably already have in your pantry.

And lastly, the mix-ins. I chose a milder onion for Caesar potato salad so you’d get more of the cheesy Caesar-y goodness and went with scallions. Then there’s the vegan parmesan cheese which again if you can find Follow Your Heart parm shreds. It’s 100% worth it for this recipe. Oh yeah, you’ll also need some salt and pepper.

How do you make Caesar potato salad?

Before you start anything, make sure you’ve got a nice batch of cashew Caesar dressing made and ready to go! To make Caesar potato salad you’ll need a few kitchen tools: a large pot to boil the potatoes in, another large bowl to make the potato salad, a rubber spatula or a wooden spoon, a knife, and a cutting board. Nothing fancy!

First, bring a pot of water to a boil on the stove and add some salt. Cut the red potatoes into 1.5-inch cubes and add to the water. Let the potatoes boil for about 25 minutes until cooked through. While your potatoes are boiling, finely chop 3 scallions and set aside.

Once your potatoes are cooked, strain the water out and add them to a mixing bowl. Refrigerate the potatoes for about 20 minutes or until mostly cool. Sometimes if I’m really impatient, I toss them in the freezer which saves a little time.

When the potatoes are cold, remove them from the refrigerator and use a wooden spoon to break apart the potatoes until they are coarsely mashed. Measure out ¾ cup of the cashew Ceasar dressing and fold it into the potatoes. Next, fold in the scallions, vegan parm, sea salt, and pepper. Feel free to serve or store in the refrigerator for up to a week. Serve with additional salt, pepper, scallions, and parm shreds.

I love this Caesar potato salad a lot, but I understand if you want to swap ingredients stuff out or add some extras. Here are some ideas I have:

Make it fishier: Anchovies are an integral ingredient in traditional Caesar dressing. If you’re looking to make my Caesar potato salad a taste fishier, whisk some kelp granules into the dressing before you fold it in the potatoes.

Again, make it fishier, but different: Capers are the vegan fishy element in cashew caesar dressing. If you are a caper lover, consider adding 2-4 Tablespoons of them in this recipe for an extra brine-y experience.

Use a different cheese: If you can’t find Follow Your Heart Parmesan, consider subbing Go Veggie! grated parm or Violife parm. If all else fails, use nooch instead.

If you’re looking for a delicious main to serve with this recipe, I have a few ideas! Consider serving this with:

In this segment, I suggest a song for you to listen to while you make Caesar potato salad! You can even stream it right here in your browser. Today’s recipe jam is Six Pack by ESG. 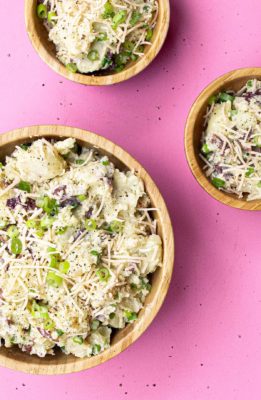