Warm up with cauliflower leek soup. This delicious wintery soup is made with coconut milk, cauliflower, leeks, onion, and more.

I mean, even when it’s 100 degrees outside it’s soup season. Am I right? But when you’re using winter vegetables like cauliflower and leeks, a cup of creamy soup when it’s extra cold outside makes you feel all nice and cozy.

I’m a sucker for soups, especially on weekdays. And lately, since I’ve been spending so much time at home. They’re one of those perfect set it and forget it meals. My cauliflower leek soup is fairly simple to make. You’ll need to dedicate a bit of time at the beginning to sauté the veg. Otherwise, you’ll just need to be patient while the soup simmers.

I have a handful of soups ready for you to try out! If you’re into creamy soups, consider looking into my pumpkin soup with almond sage crumble or my cheesy red lentil soup. If you’re more of a non-creamy soup kind of person, definitely check out my jackfruit chicken noodle soup or vegan cajun gumbo.

I don’t know what it is about the flavor of leeks but I can’t get enough. The unique flavor they bring to the table really elevates the dishes they’re a part of. I absolutely love them grilled, in hummus, or sautéed as a part of my warm mushroom salad.

I’m always looking for new ways to incorporate leeks into my recipes. If you have any suggestions, leave a comment with your favorite ways to eat them.

What ingredients do you need to make creamy cauliflower leek soup?

Onion and garlic: Onion and garlic add some savory elements to the soup. I used one yellow onion and three fresh garlic cloves. I would avoid using red onion in this recipe as it will probably turn the soup brown.

Coconut milk, vegetable broth, and lemon juice: The primary liquid of the cauliflower leek soup comes from a can of coconut milk and vegetable broth. I used a can of full-fat coconut milk but if you’re more calorie-conscious, you can go for a can of lite coconut milk. You’ll also need three cups of vegetable broth. I prefer to use the bouillon cubes from Edward & Sons. Full sodium baby! And lastly, some lemon juice. I feel like this could be an optional ingredient since you already get some acid from the wine, but lemon adds a different flavor that isn’t quite as alcohol-y.

White wine and olive oil: To give the onion and garlic a head start, you’ll need to sauté them in olive oil before adding the liquid ingredients to the soup. You’ll also need a dry white wine like a chardonnay. Keep in mind that not all wine is vegan friendly! Barnivore is a great resource for vegan alcohol and I strongly recommend checking it out. Few things are better than the combination of leeks and wine. If you’re alcohol-free, subbing a few splashes of white wine vinegar should do the trick!

Fresh thyme and rosemary: Fresh herbs really elevate the flavors of the cauliflower leek soup. I chose to use fresh thyme and rosemary, but you could really use whatever spices you think would taste great! From bay leaves to sage, I say go for it. And of course, if you’re on a budget or don’t have access to fresh spices, use two teaspoons total of whatever spice combination your heart desires.

Salt and pepper: Lastly, you’ll top the soup off with sea salt to taste and a little bit of fresh cracked pepper.

How do you make cauliflower leek soup?

Making cauliflower and leek soup brings me pure joy, let me tell ya! The kitchen smells great, the steps are minimal, and the results are delicious. In order to make it, you’ll need a large pot, a knife, a cutting board, measuring cups and spoons, a spatula or a wooden spoon, a blender or immersion blender, some string, and a ladle.

Start out by adding a coarsely chopped onion, 3 smashed garlic cloves, and a tablespoon of extra virgin olive oil to a large pot or dutch oven. Let the onion and garlic sauté for about five minutes or until translucent.

Next, tie together the rosemary and thyme with some string (If you don’t have string it’ll just be slightly more annoying to fish out before blending but that’s ok!) and add to the pot along with the wine, cauliflower, and leeks. It’s important to wash the leeks after you chop them as the layers can trap dirt. Gross! Anyways… cover the vegetables and let them simmer in the wine for an additional five minutes.

Once the wine is mostly absorbed, add the coconut milk, vegetable broth, and lemon juice gently stir and cover the soup. Allow the soup to simmer for about 45 minutes, then remove from heat and let cool.

Once the soup is cool enough to handle, fish out the herbs, and ladle the soup into a blender. Then, blend the soup until it’s thick and creamy and add salt and pepper to taste. Serve the soup with additional thyme sprigs or lemon wheels – totally optional but doesn’t it look super cute? I also like to add Jacobsen rosemary salt on top just before serving.

Make it oil-free: If you’re WFPB, this one is pretty easy to adapt. Simply sauté the onion and garlic in a splash of vegetable broth. If you’re an alcohol-free WFPB kind of person, substitute ⅓ cup of white wine vinegar or more lemon juice instead of the wine.

Make it alcohol-free: Make cauliflower leek soup alcohol-free by simply substituting ⅓ cup of white wine vinegar. I do this with soups frequently since I don’t always have white wine in my house!

Sub broccoli: Get adventurous! Instead of using cauliflower, try a couple of heads of broccoli.

Use different herbs: If you’re having a hard time finding fresh thyme and rosemary, feel free to try out different herbs or use dried herbs instead. I think almost any kind of herb would work well here. Basil, sage, marjoram, and even mint. Toss in a couple of bay leaves. You’ll be happy about it.

Make it spicy: Drizzle some hot chili oil, aleppo pepper, or crushed red pepper flakes before serving to give it an extra spicy kick.

In this segment, I suggest a song for you to listen to while you make creamy cauliflower leek soup! You can even stream it right here in your browser. Today’s recipe jam is Industry Sleaze by Cold Meat. 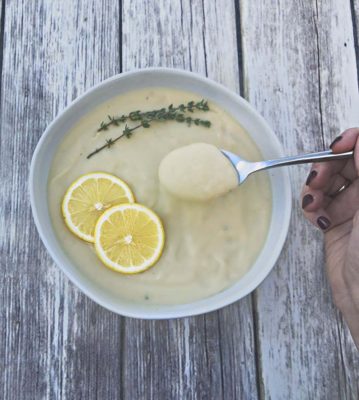 Nutrition info is an estimate. Nutrition info calculated without optional ingredients. If you’re looking for a way to make this without as much fat, you can use lite coconut milk or another non-dairy milk alternative! Just a heads up – this page contains some affiliate links which means I make a little bit of money if you click on select links and make a purchase. I only recommend products that I use on the reg!
Nutrition Facts
Creamy Cauliflower Leek Soup
Amount Per Serving (600 g)
Calories 340 Calories from Fat 207
% Daily Value*
Fat 23g35%
Saturated Fat 17g106%
Trans Fat 0g
Polyunsaturated Fat 1g
Monounsaturated Fat 3g
Cholesterol 0mg0%
Sodium 869mg38%
Potassium 1036mg30%
Carbohydrates 28g9%
Fiber 7g29%
Sugar 12g13%
Protein 7g14%
Vitamin A 1209IU24%
Vitamin C 116mg141%
Calcium 102mg10%
Iron 3mg17%
* Percent Daily Values are based on a 2000 calorie diet.
Categories: 200-400All RecipesComfort FoodGluten-FreeHealthy FoodNo Added SugarSoups & StewsSoy-Free