Is there anything more decadent than cauliflower piccata?

Growing up I used to despise chicken piccata. My mom made it often, and I don’t think my taste buds were mature enough at the time to really appreciate its delicacy. It had literally been well over a decade since I last thought about chicken piccata but recently I had a craving for that lemony caper-y buttery sauce and just had to test out a vegan version!

Let me tell you, cauliflower piccata does not disappoint. A simple crusted whole head of cauliflower, baked to perfection and then tossed in a pan with buttery lemon-y caper-y goodness is a crowd-pleaser for sure.

Cauliflower Piccata is a great substitution for chicken

I went back and forth on this for a while. Do I use tofu? Maybe mock meat? What about eggplant? In the end, I decided to go with cauliflower. Why? Because it’s very mild and it really lets the savory tart piccata sauce shine.

Of course if you’re curious, this recipe can be transferable to those ideas. If you try out different vegan piccata versions I’d love to hear about your process. If you’re new to piccata, I suggest starting with cauliflower and branching out from there.

What is piccata sauce?

According to Wikipedia, piccata is French actually means “larded” which makes no sense to me, but I guess that speaks more to my uncultured self than anything else. Traditionally, piccata sauce is made of lemon, butter, and spices. I was surprised to find that capers are not always part of piccata sauce – I’ve never seen it without. You learn something new every day I guess!

To make vegan piccata sauce, we’ll stick to the basics. No crazy substitutions or weird ingredients with this one. Just Earth Balance, white wine, lemon juice, and vegetable stock. Not the healthiest of options, I know, but I think it would be a real disservice to the dish if it wasn’t rich. Like I said earlier, the piccata sauce really shines through with this recipe.

How to make piccata sauce

The best thing about cauliflower piccata is that the sauce can cook itself while your cauliflower is roasting in the oven. To make the sauce, add some vegan butter to a pan, pan roast some lemons, and shallots. Then, add more butter, wine, and vegetable broth. Then, simmer the sauce until it’s evaporated by half and add the roasted cauliflower and capers. Easy right?

Cauliflower steaks are all the rage lately. Actually cutting anything in big chunks and referring to it as a “steak” is super trendy, right? Let’s see, there’s mushroom steaks, watermelon steak, eggplant steak, tofu steak… Where does it end? For this recipe, I recommend cutting your cauliflower into “steak” pieces. You could always go with florets if that’s what you prefer though!

I also want to chat a bit about flour. For this recipe, you’ll coat your cauliflower steaks with a mixture of flour, almonds, and spices. The coating gives the cauliflower some crispness and some extra flavor. One thing Gordan Ramsay harps on is to always season your flour so here I am telling you to do the exact same thing. This recipe calls for simple spices like nutritional yeast, garlic powder, onion powder, salt and pepper. The almond adds a little extra crunch and flavor plus healthy fats to boot.

What side dishes can I serve with cauliflower piccata?

There are a lot of options to serve with cauliflower piccata. I’d recommend probably going the quinoa route. Maybe add some herbs to it to give it a nice savory flavor! Or you can go with one of my delicious sides like sour cream mashed potatoes. You could also serve it with a nice salad on the side. My winter kale salad would also go great with this dish.

And of course there are the noodles. Traditionally piccata actually refers to the noodles served in a “piccata style” dish. Growing up, my mom never served chicken piccata with noodles. She always stuck to some kind of veggie like green beans. I’ve seen tons of piccata recipes out there that include noodles, but I’m not convinced they’re needed in this delicious recipe. What do you think? Are noodles necessary in piccata? You’ll have to let me know in the comments below.

How to make cauliflower piccata

Making cauliflower piccata is super simple. First, you’ll need to preheat your oven to 450 degrees. While it preheats, wash and cut a whole cauliflower into steak-sized pieces. The ends will break apart into florets. This is totally fine!

Pulse some almonds in a blender or food processor and add a shallow bowl with flour, nutritional yeast, onion powder, garlic powder and salt and pepper. Then, you’ll wet each piece of cauliflower with some water and dip in almond, flour, and spice mixture. Line a baking sheet with parchment paper, add the cauliflower pieces to the pan and spray each side with olive oil.

Toss the pan in the oven and bake those babies for 10 minutes on one side, flip, and then for an additional 5. While the cauliflower bakes, slice up a lemon and a shallot, brown them in a skillet with some vegan butter and set aside the lemons.

Next, you’ll cook the sauce! In the same pan with the remaining shallots, add some white wine, a little more butter, lemon juice, and vegetable broth. Reduce the sauce by half and add the capers and cauliflower. Baste for a few minutes until cauliflower is well dressed and capers are cooked.

Lastly, plate! Serve the cauliflower steaks with a generous spoonful or two of sauce. Top with a browned lemon and fresh flat-leaf parsley. Serve with quinoa, green beans, or noodles and enjoy immediately.

In this segment, I suggest a song for you to listen to while you make Cauliflower Piccata! You can even stream it right here in your browser. Today’s Recipe Jam is Into You by TC Superstar. 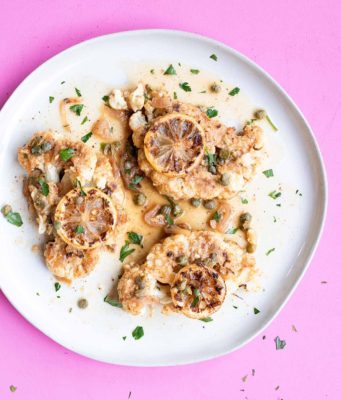