Now you, dear reader can make your own Cornish pasties at home. No yeast needed! All you need is bread flour, shortening, earth balance, salt, water and all the fillings.

What are Cornish pasties?

I can’t tell you how many times I read Harry Potter and thought Rowling misspelled the word pastry. Either way, pasties have a history as deep as the 1300s and was mostly consumed by the royal class which honestly makes no sense to me. The ingredients required to make these things cost practically a dollar.

Pasties are kind of like a mix between a Runza and a calzone. The dough is a little bit harder and flakier than a calzone, and traditional pasties have kind of a Runza vibe in terms of taste. Typically, Cornish pasties are filled with steak, potatoes, onion, and rutabagas, is covered in a dough, and baked to perfection.

There is a really cool restaurant in Arizona called Cornish Pasty Co. which is how I realized Rowling did actually know how to spell. If you ever visit, you should definitely check it out. While they have regular pasties, they also serve vegan Cornish pasties. The variety depends on the day, but man they have all sorts of flavors everything from pesto “chicken” to Guinness stew.

And that’s the awesome thing about Cornish pasties. Once you nail the dough (which honestly isn’t very difficult), you can fill these things with literally anything.

I get it. You’re not a pastry person, every cake you make is hard as a rock and you can’t knead dough to save your life. Fear not! Thankfully, the dough does most of the work for you and all you have to do is be patient.

You don’t have to be an assembly master either. You can tell by my photos that I’m not a perfect pasty crimper but I promise that whatever you make will taste great even if it doesn’t look professional.

What ingredients are in Cornish pasties?

For these vegan Cornish pasties, I wanted to emulate the “cheese and onion” version by Cornish Pasty Co. This is really similar to a traditional pasty and includes potatoes, rutabagas, onion, and vegan cheese. These can definitely be made without vegan cheese if you’re having a hard time locating it or just aren’t interested in using it.

Aside from the filling, the dough is super simple and contains bread flour, vegetable shortening, vegan butter, water, and cold water. If you don’t have bread flour, you can use all purpose, but it does make a difference in the texture of the dough as well as how easy it will be to assemble. All purpose flour doesn’t have as much gluten which makes it more susceptible to tearing.

How do you make Cornish pasties?

I was always intimidated by Cornish pasties because I thought they were a giant time suck. Turns out they’re not! Did you know the filling actually cooks while you bake it? No precooking your filling ahead of time. Just stuff it in dough and bake for an hour.

The first step to making Cornish pasties is making the dough. In a large bowl, whisk together sea salt and bread flour until combined. Then, add the butter and shortening. Using your hands (or a pastry cutter) rub the dough together until it has a beady consistency, kind of like bread crumbs.

Next you’ll add the water and knead the dough until it becomes stretchy, about 2 to 3 minutes. Toss in a bowl, coat in a tiny bit of olive oil to provide a barrier so the dough doesn’t dehydrate and then cover with plastic wrap and refrigerate for 3 hours.

While the dough rests, prep your filling. Peel some potatoes, rutabagas, and an onion, and chop them into small cubes. When your dough is almost ready to come out of the fridge, add a little bit of olive oil and salt and pepper to the filling and stir to combine.

After your dough is cold and rested, divide the dough into 6 equal parts – I use a kitchen scale to help me because I am bad at eyeballing. Then, toss some flour down on your work space to avoid sticking and use a rolling pin (or in my case, a wine bottle) to stretch the dough out into a flat disc.

Fill each Cornish pasty with a scoop of filling. It’s important to avoid adding any excess liquid because it makes crimping difficult and the longer the onions sit in salt, the more they’ll sweat causing a lot of extra liquid. I’m not a master crimper, but you can check out this nice photo guide from the Cornish Pasty Association. Once your Cornish pasties are crimped, poke a hole in the top so they don’t explode, and add each one to a baking sheet lined with parchment paper. You might have to use two baking sheets depending on the size of your pasties.

Bake your Cornish pasties for an hour at 325 degrees on the convection setting. Lastly, let the pasties cool for 10 minutes or so before serving. Feel free to serve with ketchup, A1 sauce or HP sauce. Whatever sounds good to you!

Do ahead of time

I definitely recommend making the dough ahead of time. Since I’ve been working from home, I’ll make it over my lunch break and by the time the dough is ready to work with again, I’m off of the clock and ready to make some Cornish pasties.

Can you reheat Cornish pasties?

Yes, absolutely. I heat the oven to 300 degrees and bake for about 10 minutes or until the center of the pasty is hot. They keep in the fridge for about a week and from what I hear, they freeze nicely too.

What sides should I serve with Cornish Pasties?

Not sure what to serve with your cheese and onion pasties? Here are a few ideas:

In this segment, I suggest a song for you to listen to while you make Cornish pasties! You can even stream it right here in your browser. Today’s Recipe Hang Up by Prolifigate. 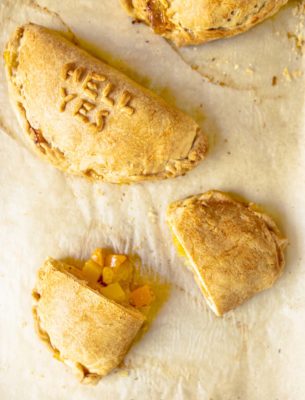