Some readers might already know this, but Hell Yes It’s Vegan comes from salads and spreadsheets! I really try to eat healthy food at my day job, but eating the same salad everyday is tiring. I started to switch things up in small ways by making my own dressings and eventually it evolved into candying nuts, making vegan cheese substitutes, and even creating my own mock meats.

If you don’t want to get that intense about salad making, I hope you take my one piece of advice: make your own salad dressings from scratch. For one, making your own salad dressing is a lot more affordable than buying a bottle from the store. Have you seen those Daiya dressings? No offense to them, but they’re like $5 and the container is tiny AF!

Another case for making your own dressing is that (usually) home made ones significantly more healthy than store-bought brands. Most dressings at the grocery store are full of oil and fat, and the ones that aren’t kind of taste weird.

Creamy Cilantro Lime dressing is all of the things 1. Affordable and 2. Lower in fat and calories compared to a lot of other salad dressings out there. I’m obsessed!

The key to making Creamy Cilantro Lime Dressing is really just to make sure both your lime juice and cilantro are fresh. Preparation for it is super simple! Just soak some cashews, add all the ingredients to a blender and combine.

Creamy Cilantro Lime Dressing is so versatile. While it obviously makes a great salad dressing, you can also use it on top of enchiladas or slather it on top of corn on the cob. You can also dip tortilla chips in it too!

Cilantro is so tricky! It’s crazy to me that there is a specific gene that’s tied to thinking cilantro tastes like soap. While I don’t have that gene, my heart breaks for the ones who do cause those little green leaves are what dreams are made of. I do seem to have the “IPAs taste like soap” gene though. Anyone else out there have that one?

And then there’s the lime component! Who doesn’t like a nice lime? I use two acids in this Creamy Cilantro Lime Dressing. One is obviously lime but I also add a little ACV for good measure.

Aside from the cilantro, cashews, lime, and ACV, all you need to make Creamy Cilantro Lime Dressing is some water, onion powder, nutritional yeast, and some salt! Easy right?

I want to take a quick second to introduce a brand new part of my blog! It doesn’t have a name yet, but I am sure I’ll develop one over time…

Some of you might know this, but I’m a deejay. I love music and thought it would be cool to share a song that you could play while preparing each recipe I post. While making Creamy Cilantro Lime Dressing, I suggest you pair it with this jam by Antena. (Shoutout to my pals Jason & Davina for introducing her to me!) 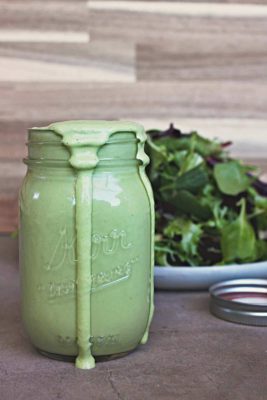 GFSFNSARWFPB
Creamy Cilantro Lime Dressing is so versatile. While it obviously makes a great salad dressing, you can also use it on top of enchiladas or slather it on top of corn on the cob. You can also dip tortilla chips in it too!
Prep Time1 hr
Cook Time5 mins
Total Time1 hr 5 mins
Servings: 16 2 Tbsp (~2 cups)
Calories: