I’ll be honest with you, I’m not 100% WFPB, but I absolutely love the idea behind limiting oil where you can. In some cases, it’s unavoidable.. You need it for texture when roasting or grilling veggies, and tbh I’m not hugely wild about using non-stick skillets for everything.

When it makes sense, I make a recipe oil-free. Most of my salad dressings are WFPB (not to mention delicious!) because I simply don’t want the extra calories in my salads. And for my nachos, I follow the same thought process. As much as I love full-on oily nachos, I hate it when my stomach hurts after eating. Oil-free nacho cheese gets you that same cheesy goodness without all the extra fat.

A note on flavor

As much as this recipe looks like nacho cheese, it tastes like nacho cheese the most when it’s served with other ingredients like beans, jackfruit carnitas, tortillas, chips, you name it. As a standalone, it’s still super tasty, but if you’re going for a copy-paste nacho cheese replica, this is probably not the recipe for you.

The texture of the cheese is similar to that of canned nacho cheese, the flavor is pretty mild, and it has a nice acidic finish for “sharpness.” I personally love it, but wanted to warn folks who are looking for something more like the real thing to maybe try melting some Daiya shreds instead. Personally, oil-free nacho cheese scratches that itch for me. It’s a great substitution and doesn’t make me feel awful inside.

What ingredients do I need to make oil-free nacho cheese?

Potatoes: Potatoes make up the base of this oil-free nacho cheese. Its texture, once blended, resembles real nacho cheese quite a bit. For this recipe, I recommend using yukon potatoes. They have a great flavor and blend up real nice.

Carrots: Another ingredient that makes up the base of oil-free nacho cheese is carrots. Nothing fancy here, just three medium-sized carrots will do. I’d avoid using heirloom carrots for this recipe because they might turn your cheese brown.

Oat milk: Instead of oil, I chose to thin my oil-free nacho cheese out with trusty oat milk. Most plant milks will work in this recipe (maybe not coconut though) as long as it’s unflavored and unsweetened.

Nutritional yeast: If you’re wondering how you’ll get carrots and potatoes to taste like cheese, nutritional yeast is the answer. I absolutely love this stuff and if you get a brand that’s fortified with B-12, even better!

Miso: If you’ve made any of my other cheesy recipes before (like my cashew mac and cheese), you’ll know I’m a huge fan of adding miso to any mock-cheese style dish. There is something special about it that brings out a different dimension since it’s fermented that citrus can’t give you.

Lemon juice: For some extra sharpness, you’ll need two tablespoons of lemon juice. I prefer to use fresh lemon juice in this recipe, but if you only have shelf stable juice, that will work too.

Onion and garlic powder: To season the oil-free nacho cheese, you’ll need garlic powder and onion powder. I don’t know what it is, but the combination of these two spices make most recipes better!

Crushed red pepper and sea salt: The final step in making oil-free nacho cheese is seasoning the cheese to your liking for both saltiness and spiciness. I used standard crushed red pepper to spice up the cheese but if you have cayenne or even chili powder that will work too. Just make sure you add a little at a time so it’s not too spicy.

How to make oil-free nacho cheese

Making oil-free nacho cheese is super simple! You’ll need a few kitchen tools like a potato peeler, a knife, a cutting board, a medium-sized pot, a strainer, a blender (I have also made this with a food processor and that works too!), measuring cups and spoons, a medium-sized bowl, and a whisk.

Next, drain the potatoes and carrots and toss them in a blender along with the oat milk, nutritional yeast, lemon juice, onion powder, and garlic powder. Blend the ingredients together until completely smooth. Then, transfer the cheese sauce to a bowl and whisk in salt and crushed red pepper flakes to taste. Serve the oil-free nacho cheese on nachos, burritos, whatever you can think of!

Oil-free nacho cheese isn’t just for nachos. Here are some additional ideas I have for serving this delicious sauce.

In burritos: Whip up some of my oil-free refried beans to make bean and cheese burritos. I also love adding rice, lettuce, and jackfruit carnitas.

On roasted veggies: Roast some broccoli, cauliflower, or Brussels sprouts in the oven and top them with oil-free nacho cheese. YUM

On a baked potato: Who else grew up on baked potatoes from Wendy’s? Relive your childhood by steaming some broccoli and topping a baked potato with it plus the nacho cheese.

Make mac and cheese: I already have a great recipe for cashew mac and cheese but if you’re allergic to nuts, you can try using my nacho cheese as a substitute for cashew cheese sauce. Top it with jackfruit carnitas!

Make a melt: Tired of trying to make a melt only for the vegan cheese to never get cheesy and melty? Skip the hassle and use our oil-free nacho cheese instead.

If you liked this oil-free nacho cheese, feel free to check out some of my other WFPB recipes like:

In this segment, I suggest a song for you to listen to while you make oil-free nacho cheese! You can even stream it right here in your browser. Today’s recipe jam is Sticky by The Maine. 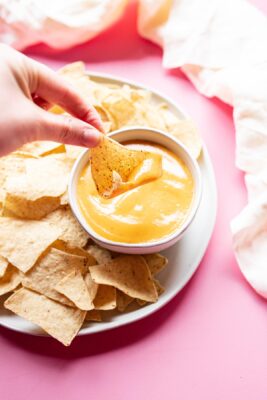