Since we’re still spending the majority of our time at home, I’ve upped my snack game. From chile de árbol hummus to sweet pea dip, I’ve got you covered.

Enter the saving ingredient of sour cream seasoning: soy milk powder. As much as I love the nutty and cheesy flavor of nutritional yeast, soy milk powder brings a creamy flavor instead. That combined with a little bit of apple cider vinegar makes for a really delicious vegan sour cream flavor.

What ingredients do you need to make sour cream and onion snack mix?

Chex cereal: It doesn’t really matter whether they’re rice, corn, or wheat Chex. Just make sure you have 6 cups handy which is about a regular-sized box. I went a little extra with this for the good ol’ blog sake and used all three. If I’m not taking photos, I usually go for the “wheat multigrain squares” since that’s what Sprouts has on hand.

Nuts: To add some healthy fats and proteins, you’ve gotta add some nuts. For sour cream and onion snack mix, I added a half-cup each of raw cashews and almonds. You can really add any kind of nut though – pecans, walnuts, you name it!

Mini pretzels: No snack mix is complete without mini pretzels! Any brand will do but stay away from pre-flavored ones and just get the standard salty boys. For this mix, I used Snyder’s gluten-free mini pretzels.

Extra virgin olive oil and apple cider vinegar: snack mix bakes in the oven for a surprisingly long amount of time. To help spread the seasoning throughout the mix, you’ll need a third cup of extra virgin olive oil. I get that it looks like a lot, but you also get 9 cups of snack mix out of this one recipe so a little goes a long way! You’ll also need some apple cider vinegar which brings out the “sour” in “sour cream.”

Salt: What good is snack mix without a boatload of salt? I use standard sea salt in sour cream and onion snack mix and it turns out super tasty every time.

How do you make sour cream and onion snack mix?

What’s so great about sour cream and onion snack mix is that you can make it with the whole family. It’s one of those recipes where every single family member can pick an ingredient to go in the mix. Anything goes – from bagel chips to minced onions, and beyond.

To start, preheat your oven to 250 degrees. Next, whisk all of the spice ingredients together and set aside. In another bowl, whisk the oil and vinegar together.

Now, it’s time to get mixing! In a large bowl, add the Chex cereal along with the pretzels and chopped nuts. Use your hands to gently mix the ingredients. Then add half the olive oil and vinegar to the snack mix. Use your hands to mix the liquid into the snack mix and then add half the spice mix. Continue mixing and repeat the process again until you’re out of liquid and sour cream spice mix.

Line two baking sheets with parchment paper and divide the sour cream and onion snack mix in half, spreading the mix evenly across the two pans. Bake the sheets for about 1 hour, rotating racks every 15 minutes and flipping the snack mix half-way through. The mixture should be light and toasty with no wet cereal.

Remove the sour cream and onion snack mix from the oven. Taste and add more salt if it needs it. The mix keeps really well so just toss it in a pyrex container or a mason jar once it’s completely cooled… if it even lasts that long.

Sour cream and onion snack mix is just the beginning. Once you master the art of baking your snack mix, the possibilities are endless.

Go gluten-free: If you stick with corn and rice Chex cereal and use gluten-free mini-pretzels, you can easily make a gluten-free version of sour cream and onion snack mix.

Go rogue: Like I said, once you have the basics down, you can really do anything with this snack mix. I love switching up the spices to make the mix spicy with cayenne and smoked paprika. I also have some dried buffalo seasoning I’ve been meaning to give a go on this mix.

Up your snack game.

I love snacks! If you’re looking for more of my snack recipes be sure to check out

In this segment, I suggest a song for you to listen to while you make sour cream and onion snack mix! You can even stream it right here in your browser. Today’s recipe jam is Little Sister by Saâda Bonaire 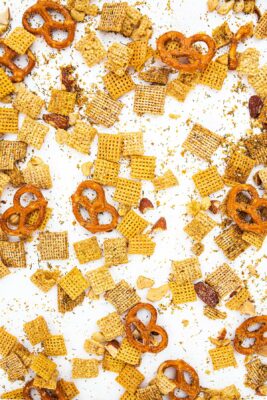