Our spicy seitan sausages are incredibly versatile and easy to make. Perfect in a bun, in soups, on pasta, on pizza, and more!

Making your own vegan meat is easier than you’d think

I used to be so intimidated by the idea of making my own mock meat, but once you try it a couple of times, you really do get the hang of how to work it to achieve your desired texture and add the correct spices to get a great flavor.

I started making and posting a lot more vegan meat recipes since generally speaking, folks are still spending the majority of their time at home. While this is no sourdough bread, it’s still a kind of time-consuming. Thankfully this recipe makes 8 sausages, and can always be doubled or even tripled and stored in the freezer.

One thing about this recipe that might look alarming is the volume of spices required. I ask you to trust me! The flavor of the sausages is relatively mild despite the fact that you’ll need 2 teaspoons of cayenne pepper. You could probably bump this up to 3 or 4 if you’re looking for an even spicier flavor. Vital wheat gluten is very bland and earthy, so a lot of spices are needed to balance it out!

What ingredients are in spicy seitan sausages?

In this recipe, I provide the ingredients needed to make the sausages, as well as one idea for serving them – in a pretzel bun with sautéed peppers and onions, BBQ sauce, and vegan mayo. Sound familiar? That’s because this is one of my favorite combinations and makes its way into these delicious Vegan BBQ Chicken Sandwiches – another one of my fave seitan recipes.

Of course, this is just the beginning. Once you have these sausages made, you can pretty much do whatever you want with them. They taste wonderful in soups (Hint: vegan gumbo recipe coming soon!) and are so delicious on pasta with marinara sauce. Not to mention, you can add the spicy seitan sausages to a bun and top with an infinite combination of condiments, vegetables, ingredients, etc.

How do you make spicy seitan sausages?

While making spicy seitan sausages is time-consuming, it’s not very complicated. To make this recipe you’ll need a medium-sized bowl, a silicone spatula, a blender, a large pot or dutch oven, foil, a baking sheet, tongs, a skillet, and a way to toast or warm your hot dog buns.

To start, add the vital wheat gluten to a medium-sized bowl and set aside. Then, add an entire can of chickpeas plus the extra water in the can (also known as aquafaba) to a blender with creole seasoning, garlic cloves, cayenne pepper, black pepper, dried thyme, onion powder, smoked paprika, liquid smoke, molasses, and apple cider vinegar. Blend to combine until the mixture is fully incorporated.

Return to your vital wheat gluten, and pour the chickpea spice mixture into the bowl. Use a silicone spatula to stir carefully and then use your hands to mix the dough until no vital wheat gluten remains. Let the seitan sit for 30 minutes to fully hydrate.

Next, bring a large pot of water to a boil on the stove and form your seitan into sausage links. This recipe makes roughly 8 spicy seitan sausages that are about the same size as Field Roast. You can divide the mixture into 8 different parts if you have a kitchen scale, but if you don’t just eyeball it.

Use your hands to roll the seitan into a sausage-link shape and wrap in foil, twisting each side kind of like a tootsie roll. It’s okay if they’re not 100% perfect! The seitan sausages will expand when you boil them to fill out any excess foil space.

Transfer your foil seitan tootsie rolls to the boiling pot of water. Cover the pot and simmer the spicy seitan sausage for about 15 to 20 minutes. In the meantime, preheat your oven to 375 degrees.

Next, use a pair of tongs to remove the seitan from the pot and spread across a baking sheet. Bake the spicy seitan sausage with the foil intact for 20 minutes. While the sausage cooks, break out a skillet and sauté sliced bell peppers and onions in olive oil – add salt to taste. Set the peppers aside until you’re ready to assemble the sausages, but keep the skillet handy.

Once the spicy seitan sausage is fully cooked, remove them from the oven, carefully remove the foil and add to the skillet to brown slightly. At this point, prepare your buns by cutting them, toasting/warming them, whatever you want to do. When you achieve some nice browning on the sausage, add them to the buns, top with peppers and onions, and drizzle with vegan mayo and bbq sauce.

What to serve with spicy seitan sausages?

I love these spicy seitan sausages so much! If you’re looking for some delicious side suggestions, here are my suggestions:

If you’re looking to change things up a bit, here are some suggestions for adapting spicy seitan sausages.

Use different toppings: I’m a sucker for peppers and onions, but spicy seitan sausages go with more than that. Crack open a can of vegan chili, top with cashew mac & cheese, or sauerkraut and mustard.

Ditch the bun: Feel free to add spicy seitan sausages to pizza, pasta, salad! As Taco Bell says, “Think Outside the Bun.” (Or is it “Live Más” now?)

Ditch the seitan: I’m not here to judge! If you think this recipe looks really good but don’t have the time to make your own seitan… Try swapping the spicy seitan sausages out for Beyond Hot Italian Sausages or Tofurky Kielbasa Sausages.

In this segment, I suggest a song for you to listen to while you make spicy seitan sausages! You can even stream it right here in your browser. Today’s recipe jam is Twist by Tones on Tail. 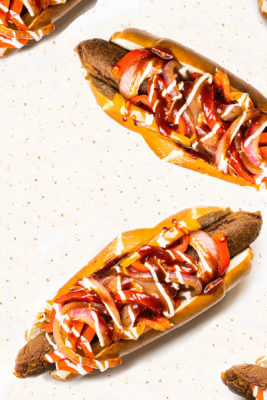