BBQ chicken sandwiches are a staple in our house. We make chicken seitan pieces ahead of time, and make the sandwiches two at a time throughout the week!

When was the last time you had BBQ chicken?

Long gone are the times of BBQ chicken for vegans. One of the first meals I learned how to make was bbq tofu and it was honestly not good at all. I thought coating the tofu pieces in bbq sauce and sticking them in the oven would work. I was very wrong and it did not hit the same spot as BBQ chicken.

BBQ made a big comeback for vegans recently with all the variations of BBQ jackfruit. If you’re looking for some wonderful BBQ jackfruit recipes you can look into these BBQ jackfruit tacos. Enough about jackfruit! This recipe is about seitan.

I had kind of written off any hope of achieving BBQ chicken with my failed tofu attempt, but once I learned how to make chicken seitan, I saw the light.

What kind of BBQ sauce should I use for BBQ chicken sandwiches?

To that, I ask: what’s your favorite BBQ sauce? For this recipe, I would try to go with something less sweet. We used Sprouts Original sauce for the sandwiches pictured throughout the recipes. This particular BBQ sauce is smoky, tangy, and a tad sweet. You can use Carolina BBQ sauce or a nice KC BBQ – whatever is your favorite!

I’ve made these with a handful of sauces and even some of my own homemade sauces and my favorites are either the Sprouts Original like I mentioned above or Stubb’s spicy BBQ sauce.

A word on chicken seitan

This recipe is a two-step process.

I know there are a lot of processed mock meat options out there but if you’re spending a lot of extra time at home like me, I strongly suggest making your own chicken seitan. The entire process takes under two hours and yields enough chicken to make this recipe 4 times.

If you don’t have time to make your own seitan, I’ll happily link you to a few mock chicken products that I think would work ok for this recipe

What ingredients are in vegan BBQ chicken sandwiches?

Thankfully, making the chicken seitan is the most time-consuming part and ingredient-heavy part of this recipe. To make BBQ chicken sandwiches you’ll need a bun, some olive oil, bell peppers, onions, vegan mayo, BBQ sauce, and fajita seasoning. That’s it!

I haven’t been very picky about the bread I’ve been able to get lately since options are limited at the grocery store, so the ones in this recipe are just boring white buns. Those will do or you can go wild and buy a variety with sesame seeds.

Peppers and onions are the only toppings on this sandwich aside from the BBQ seitan chicken. Sometimes you just need to keep things simple, you know? Peppers and onions compliment the BBQ flavor and add some extra texture. For peppers and onions in this photo, I used a red onion and a yellow bell pepper but you could really use any kind you have lying around – shallots, yellow onions, red bell pepper, green bell pepper, add a jalapeño if you like spicy stuff. You get the idea.

How do you make BBQ chicken sandwiches?

I thought you’d never ask! Making BBQ chicken sandwiches is very simple. You’ll need two skillets – one small one to heat the BBQ chicken and a medium-sized one to sauté the peppers and onions. You’ll also need a contraption to toast your bread buns – I have a trusty toaster oven but perhaps for you, it’s a regular toaster, a skillet, or an oven.

In the medium-sized skillet, add a little olive oil and sauté the peppers and onions. I like starting with the heat on high and lower after I achieve a nice browned color.  While your peppers and onions cook, you’ll want to toast your buns and add a tiny bit of oil to the smaller skillet.  Add about a half a cup of the chicken seitan to the skillet. Heat the pieces until browned on all sides and chicken is warm all the way through. Next, add the BBQ sauce and remove from the heat. The sauce will warm with the pan but shouldn’t burn. Lastly, Check-in on your peppers and onions and add some fajita seasoning to them. If you don’t have fajita seasoning, you can use seasoned salt, or whatever mild spice blend you might have on hand. Salt always works too!

Now that all the pieces are done – your peppers and onions cooked, BBQ chicken warmed, and toasted bun – it’s time to assemble your sandwich. On top of the bottom bun, lay some BBQ chicken seitan on top, then add the peppers and onions, and lastly add some vegan mayo to the top bun and sandwich the buns together. And there you have it – BBQ chicken sandwiches!

Lately, we’ve been eating a lot of asparagus. I roast them in an air fryer for a few minutes and then add habanero flake salt and fresh cracked pepper. This could also work with green beans or potatoes, really anything. We’re flexible around here at Hell Yes It’s Vegan.

In this segment, I suggest a song for you to listen to while you make BBQ chicken sandwiches! You can even stream it right here in your browser. Today’s Recipe Jam is Highway by Automatic. 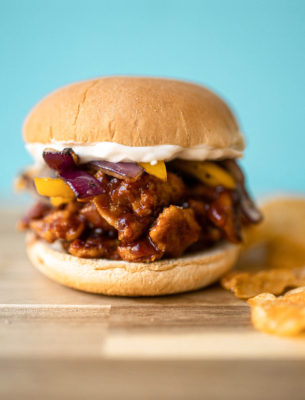