I think I actually convinced my boyfriend that beets are delicious with this super simple vegan beet burger recipe.

The best thing about veggie burgers

Have you ever noticed that every veggie burger is unique? There are so many ingredients that can be added to make different combinations of textures and flavors creating endless possibilities for interesting meals. I’ve had a handful of awesome vegan burgers in my day. While the Beyond Burger is super delicious, I remember a time prior to when we were just happy with some smashed black beans and a couple of corn kernels.

My experience with homemade veggie burgers isn’t extensive, I have to admit, but I am an expert at eating them in public. In the city of Phoenix, we have a handful of great local veggie burger options.

My first thought goes to the vegan burger at OHSO Brewery. It’s hard to even know what they make their burger out of. I think there’s some kind of lentil action going on but it’s hard to tell. The burger is lightly seasoned and is pretty thin. It has a good chew and doesn’t break apart until it’s in your mouth. If you’re ever out here, I recommend giving it a go.

Another vegan veggie burger in Phoenix I’d like to call out is the white bean burger from Rehab Burger Therapy. Probably the most unique take on a veggie burg I’ve ever had. The burger is mildly flavored and is fried in panko bread crumbs making it crunchy on the outside but soft on the inside, kind of like a falafel. I’ve never had anything like it!

If you’ve had a great veggie burger, I want to hear about it! Tell me in the comments below where you’ve had the best burger of your life and I’ll add it to my list to check out.

I never realized until this week how easy it is to make your own burgers. I always assumed that it required freezing, soaking, stress, etc, but I’ve found this experience to be super easy and quite enjoyable. Watch out world – vegan beet burgers are just the beginning.

The first step to making a good veggie burger is choosing your base. For my vegan beet burger, I went with roasted beets and a can of black beans. Alternatively, you can choose from almost any bean, grain, and vegetable combination under the sun. Next step is to choose your binder. Beet burgers call for a small amount of flax meal as well as some vital wheat gluten, but I’ve seen other burgers things from chia seeds to bread crumbs. And lastly, your seasonings. I kept things super simple with the vegan beet burger so the flavor of the beets would still come through and went with some red onion, garlic, a vegan Worcestershire, and some optional mushroom powder.

If you have a favorite homemade veggie burger idea or recipe you’d like to share, let me know. Now that I’m not afraid of making burgs, I want to try more of them!

What’s in a vegan beet burger?

As stated above, there are a lot of different ways to make a beet burger. I tried to keep mine as simple as possible since many of us are experiencing strange times at the grocery store due to COVID-19.

The recipe requires 12 ingredients and minimal effort. Only caveat is that it does require some patience as they take a while to bake. The base of vegan beet burgers is none other than beets of course. Beets are rich in an antioxidant called betaine which helps improve your risk of cellular damage.

In addition to beets, these burgers include red onion and black beans as the base. We’ve already covered the nutritional value of black beans in this black bean lentil soup recipe, so if you’re curious, check it out! Next are the binders. For vegan beet burgers, I chose to use flax meal and vital wheat gluten for some added protein. If you don’t have vital wheat gluten, you could probably use flour and it would turn out relatively the same since there isn’t very much in it. If you do this, you should let me know if it turns out because I haven’t tried it yet!

And lastly, let’s not forget the spices, seasonings, and flavors for the vegan beet burgers. There is a little apple cider vinegar which helps neutralize the weird flavor of the vital wheat gluten and then some garlic, a vegan Worcestershire, salt, pepper, and if you happen to have it, mushroom powder. I picked it up at Trader Joes last year and honestly had no idea what to do with it, but this seemed like an appropriate place to add. If you don’t have some on hand, use an extra dash of Worcestershire and call it a day.

Are beet burgers good for you?

I’m not sure about all beet burgers, but these ones are pretty dang healthy. Each burger clocks in around 240 calories and contains over 16 grams of protein thanks to the black beans and vital wheat gluten.

If you’re looking at macros, this one is a little heavy on the carbs coming in at 65%, but it’s mostly because of how little fat is in the recipe. Each burger contains around 2-3 grams of fat coming in at 9%. And lastly the protein at 26%.

How to make vegan beet burgers

Making beet burgers is super easy and just takes some time. To start, you’ll need to roast your beets. This can be done ahead of time the day before if you are going to be short on time. To prepare, simply preheat your oven to 400 degrees, peel and chop a medium sized beet into one inch pieces and coat lightly with olive oil spray. You’ll need to roast these for 40-60 minutes flipping halfway through. Once you can easily sink a fork into the largest piece, they’re ready to be removed from the oven.

Once the beets are cool enough to handle, drop the temp in the oven to 375 degrees. Pulse the beets in a food processor and set aside in a large bowl. Then you’ll puree a can of drained and rinsed black beans and add it to the bowl. Next, pulse about a quarter cup of red onion to very fine pieces and add it as well.

Now that you have your processed ingredients, you can simply add the rest of the items needed to make the beet burgers to the bowl: the chopped garlic, the vital wheat gluten, flax meal, apple cider vinegar, Worcestershire, salt, pepper, and optional mushroom seasoning. You’ll want to stir the mixture for a few minutes to ensure all the ingredients are combined evenly.

Line a baking sheet with parchment paper, and using your hands, shape four patties. Spray each side with olive oil and bake for 10-15 minutes on each side, then broil on each side for 2-3 minutes until you see some browning.

At this point, the burgers are ready for building! I chose to eat these on a bun with some mixed cabbage, onion, pickles and vegenaise (not pictured in the photo because I actually didn’t eat this immediately after my photo session and wanted to save the bread). I also recently ran out of pickles and made a coleslaw out of the cabbage and onions as a topping too. The burgers on their own are pretty flavorful so you don’t really need a lot of extra flavors. Maybe some ranch would be good? Whatever you’ve got really!

In this segment, I suggest a song for you to listen to while you make vegan beet burgers! You can even stream it right here in your browser. Today’s Recipe Jam is Burning Off My Clothes by Sworn Virgins. 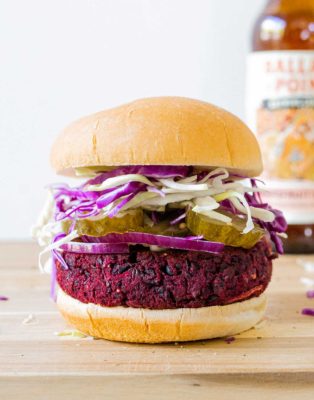 Nutrition Information is for just the beet burger patty. The information is an estimate and does not include optional ingredients.   Just a heads up – this page contains some affiliate links which means I make a little bit of money if you click on select links and make a purchase. I only recommend products that I use on the reg!
Nutrition Facts
The Best Vegan Beet Burger
Amount Per Serving (209 g)
Calories 253 Calories from Fat 36
% Daily Value*
Fat 4g6%
Saturated Fat 1g6%
Trans Fat 0g
Polyunsaturated Fat 1g
Monounsaturated Fat 2g
Cholesterol 0mg0%
Sodium 1113mg48%
Potassium 689mg20%
Carbohydrates 40g13%
Fiber 14g58%
Sugar 6g7%
Protein 16g32%
Vitamin A 25IU1%
Vitamin C 6mg7%
Calcium 101mg10%
Iron 4mg22%
* Percent Daily Values are based on a 2000 calorie diet.
Categories: 200-400All RecipesComfort FoodHealthy FoodMainsNo NutsSandwiches