Make this recipe with pantry ingredients

If you’re like me, you’re probably not going to the grocery store as much as you used to. What I love about vegan chicken parmesan is that all of the ingredients with the exception of miso, lemon juice, garlic, and vegan mozzarella cheese are likely already in your pantry!

If you’re lucky, you should have most of these ingredients on hand. The only two special items required are vital wheat gluten and no chicken bouillon.

I’m sorry this one is kind of involved

If you’ve already jumped down to the recipe card, you’ll know that this recipe takes 3 hours and 40 minutes to make but I promise half of that time is simply letting your seitan rest at different stages in the baking process.

I also promise that this recipe is 100% worth the time and effort. My boyfriend says this is one of the best things I’ve ever made and I’m confident that it will be one of yours too.

What ingredients are in vegan chicken parmesan?

If you’re looking to make this meal easier on yourself, I strongly recommend making the chicken seitan cutlets ahead of time. They store really well in the refrigerator and even freeze like a charm.

I love making these ahead of time and will use a couple of cutlets for vegan chicken parm, and will reserve the rest for other recipes. By making the chicken cutlets ahead of time, you’ll cut the recipe time in half.

How to make chicken seitan cutlets

In order to make vegan chicken parmesan, you first need to make chicken seitan cutlets. Thankfully once you’ve made seitan 2-3 times you really can get the hang of controlling it to fit your needs. This specific seitan requires boiling and baking because honestly, I don’t have a steam basket and whenever I try to use an instant pot, it dries out. If you are more skilled than me, feel free to steam the seitan instead of following my method, but I do find this is the most fool-proof way to achieving juicy chicken seitan.

To make chicken seitan cutlets, you’ll need a blender, a silicone spatula, a food processor, a medium-sized bowl, a baking sheet lined with parchment paper, a large pot for the stove, and a pair of tongs. First, you’ll add the can of chickpeas, spices, no chicken bouillion, miso, and apple cider vinegar to a blender. Run the blender until the mixture is smooth, and add to a medium-sized bowl with the vital wheat gluten and use a silicone spatula to mix. Once there is no loose flour, let the dough sit for 30 minutes.

Once the flour is fully hydrated, break out your food processor, a baking sheet lined with parchment paper, and a large pot filled with 4 cups of vegetable broth or 4 cups of water. Divide your dough into 6 equal parts – a kitchen scale would come in handy here, but I found out mine broke while making this recipe to shoot. Oops. Working one piece of dough at a time, add to the food processor and process until the dough comes apart and then back together and then for an additional 15 seconds – this may differ from food processor to food processor, but for me, it’s about 1 minute and 30 seconds. Next, remove the dough and use your hands to stretch it out a few times into a cutlet shape and set on the baking sheet. It will spring back a little bit, and that’s ok!

Once you have all six cutlets, bring your pot to a simmer. Perform one final “stretch” of each cutlet and add them to the broth/water. Let the cutlets simmer for 15 minutes. Meanwhile, preheat your oven to 375 degrees. Check back on your seitan, It will have increased significantly in size and I apologize in advance if it terrifies you. Use your tongs to move the cutlets around ensuring sticking does not occur and that the cutlets cook evenly.

These cutlets can be stored in the fridge for up to 10 days. Alternatively, they freeze like a charm.

How to make vegan chicken parmesan

To make vegan chicken parmesan, you’ll need a pan to marinate the chicken seitan, three bowls for your dredging station, a baking sheet lined with parchment paper, and casserole dishes or some large cast-iron skillets.

The hard part is over, and now it’s time to make the rest of the recipe. First, you’ll take your chicken seitan cutlets, and squeeze a healthy serving of lemon juice across the cutlets. Add chopped garlic cloves and let soak for 30 minutes.

While you wait for your seitan to marinate, prepare your dredging station. In one bowl, add flour and some sea salt. In a second, add the coconut milk, flax meal, garlic powder, onion powder, and more sea salt, and in the third, add the panko.

Working one cutlet at a time, and using a “dry hand” and a “wet hand,” dunk each cutlet into the flour, the coconut milk mixture, and the panko, shaking after each dredge. Add each cutlet to a baking sheet lined with parchment paper. Let sit at room temperature for another 30 minutes.

Preheat the oven to 350 degrees and place the baking sheet in the oven. Bake the pieces for 40 minutes carefully flipping halfway through. The pieces should be lightly browned. Remove the seitan from the oven and prepare your casserole dishes or cast iron skillets. Add a thin layer of marinara sauce to the bottom. Then add the chicken seitan cutlets, and top with more sauce, and vegan mozzarella cheese. You’ll want to leave some of the crust un-sauced to get some crispy parts throughout.

Turn on your boiler to 450 degrees and bake until the cheese has melted – about 10 minutes. Top with dried parsley and serve immediately.

Make it your own

We think our vegan chicken parmesan is perfect as written, but we won’t stop you if you need to change it up.

What can I serve with vegan chicken parmesan?

This meal is pretty filling on its own. If you’re looking for something to serve vegan chicken parmesan with, I suggest sticking a lighter side like:

In this segment, I suggest a song for you to listen to while you make vegan chicken parmesan! You can even stream it right here in your browser. Today’s recipe jam is I Love You by Helen. 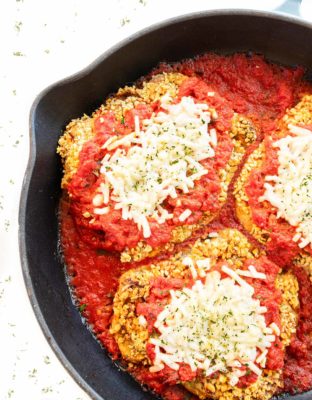 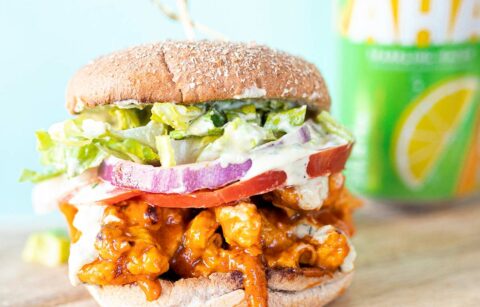 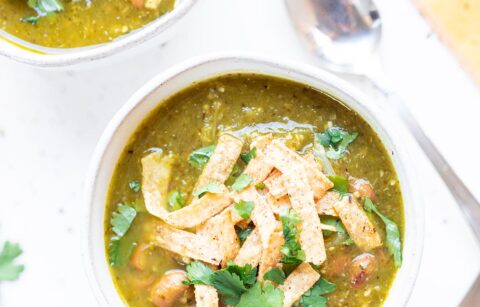