Looking for a restaurant-quality version of vegan hot and sour soup? This is the recipe for you.

Is Hot and Sour Soup Vegan?

Typically hot and sour soup is made with a handful of non-vegan ingredients like eggs, pork, chicken broth, and so on. It might appear to vegetarian-friendly because often times it features tofu and eggs, but traditionally, hot and sour soup isn’t vegan. Thankfully, the things that make it not-vegan are easy to adjust.

Instead of chicken stock, we’ll stick with trusty vegetable broth. And for the eggs? We’ll simply omit. I did try to create this dish with Just Egg but I couldn’t get the consistency to resemble egg ribbons. But then I was reminded of the best hot and sour soup I ever had in my life at an old Phoenix restaurant that closed a while back and ditched the Just Egg for some different ingredients.

Is Hot and Sour Soup Good for you?

Generally speaking, hot and sour soup is pretty healthy. It contains shiitake mushrooms which are a high source of copper and vitamin B5. Pineapple contains more than your daily dose of vitamin C, and sprouted tofu gives you a nice source of protein. If you’re limiting your carbs, you should look out for the carb contents of the rice cake noodles but know that if you choose to omit, I wouldn’t recommend eating this as a main meal since that would drop the calories per serving from 399 to 189.

If you’re looking for additional healthy things to add to this soup, I would go for some spinach, possibly some bok choy, possibly some mock chicken if you can find one that is more protein-dense, like Beyond Meat.

Before you freak out and revolt against this pineapple soup thing, I demand you try it. If you’re a fan of hot and sour soup in any capacity, you’re going to love the dimension of sweet and sour pineapple brings to the soup.

In addition, the rice noodle cakes help make the soup more of a main than a side or starter. I am a big fan of them, but they are a little pricey on Amazon. If you’re unable to find them at your local Asian market / don’t want to spend $10, I totally get it. But if you’re intrigued and want to try them out, I strongly recommend it.

How to Make Hot and Sour Soup

Vegan hot and sour soup is actually a lot faster to make than a lot of other soups due to a short simmer time. To make hot and sour soup, you’ll add minced ginger and garlic to a pot with some vegetable stock and let simmer for a few minutes, then add the pineapple, shiitake mushrooms, and bamboo shoots stirring the mixture occasionally to make sure sticking doesn’t occur. Next, you’ll add a few teaspoons of cornstarch to a splash of vegetable stock and whisk until combined and set aside.

Then, you’ll add the remaining vegetable broth along with the rice vinegar, soy sauce, white pepper, chili oil and cornstarch mixture. Bring to a boil for five minutes and add the tofu and rice noodle cakes and simmer for an additional five. Double-check the noodles to ensure they’re cooked all the way through and serve immediately with scallions and optional sesame seeds.

In total, the recipe takes about 20 minutes from start to face making it a weeknight favorite in my house.

All I ever want to eat is soup lately. In addition to this vegan hot and sour soup, I’ve been experimenting with a broccoli cheese soup made with coconut milk, cauliflower, broccoli, and nutritional yeast. It’s pretty good, but the way I prepared it was kind of strange and involved too many steps. Maybe I can figure out how to streamline it soon.

I love soup though. If you’re looking for more soup recipes by me, check out these options:

If you have a favorite soup that you’re looking to veganize, I would love to take a stab at it. Please let me know in the comments if there is something you’ve been dying to have but haven’t been able to figure out how to make vegan. I want to make all your vegan dreams come true.

In this segment, I suggest a song for you to listen to while you make hot and sour soup! You can even stream it right here in your browser. Today’s Recipe Jam is Nowhere Girl [Original] by B Movie. 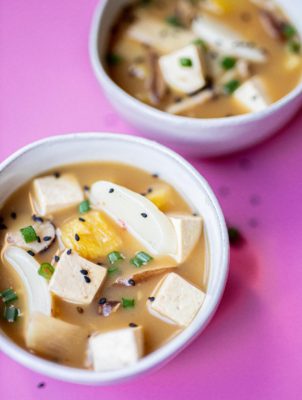