Try vegan Runzas with cheese adapted from a 1960’s excerpt from the Omaha World-Herald. It’s the same Runza that Nebraskans know and love, but vegan!

We Nebraskans take pride in the simple things like Husker football, hosting the College World Series, founding Kool Aid, and of course, Runzas. I mostly associate Runzas with Husker games. My dad used to take me to a game every year and we would always get Runzas during the game.

Also, people don’t believe me when I tell them that they put Runzas inside of t-shirt / hot dog launchers, and pelt them at the crowd during game breaks.  I guess it’s just a Nebraska thing.

Shout out to my cousin

My cousin Erin posted this photo of a Runza recipe from the Omaha World-Herald on Facebook a few years ago, and I had totally forgotten that Runzas even existed. My memories were flooded with cold Husker games, crinkle-cut fries, and cheers so loud you had to cover your ears. I absolutely needed to veganize my home state staple.

Surprisingly, it was super easy to veganize the Omaha World-Herald recipe. For the eggs, I made a simple flax egg which is essentially whisking water and flax together and letting it hang out for a few minutes until it’s congealed.

The butter was easy. I think most vegans are familiar with vegan butter substitutes by now. My favorite vegan butter for anything baking related is Earth Balance Buttery Sticks so I went with that.

The biggest hurdle to making vegan Runzas is sourcing plant-based hamburger meat. I am usually on team Beyond because they have never tested on animals, but this time the grocery store only had Impossible. You’ll need about 12 ounces of plant meat which can be 3 Beyond burgers or one block of Beyond or Impossible beef. At this point, you can find Beyond or Impossible in most health-forward grocery stores. There are also tons of other brands emerging every day! I haven’t tried Lightlife’s yet but I love their tempeh. And then there’s this Awesome Burger thing. As a last resort, you can use Gardein’s beefless crumbles. They’re good in a pinch!

Typical Runzas are served without cheese, but I have to say that a Runza with cheese is my preference… or at least it was my preference. I haven’t had one in over 12 years! I picked Follow Your Heart American slices for the nice yellow color, but your favorite cheddary vegan cheese will do. I’ve also made these with Follow Your Heart’s smoked gouda slices and they were A+.

What ingredients you’ll need to make vegan runzas with cheese

There are two components to vegan runzas: the dough and the filling

Active dry yeast, water, sugar, and salt: Runza dough is very particular. It kinda has the texture and consistency of a cross between pizza dough and really cheap hot dog buns. I know that’s an odd way to describe it, but if you’ve never had one before, I just want to let you know what you’re getting into. This dough is made by adding active dry yeast, warm water, sugar, and salt together in a bowl. You’ll stir the mixture until the sugar and yeast is dissolved, and then move onto the next ingredients.

Plant butter and a flax egg: For the plant butter, I went with Earth Balance buttery sticks. You really don’t need much for this recipe – 2 tablespoons. Then, a flax egg. Since the original recipe makes 16 and we’re cutting this in half to make 8, we actually can make half of a flax egg by adding ½ a tablespoon of flaxseed meal and 1 tablespoon of water.

Flour and water: You can’t have dough without flour! This recipe calls for simple all-purpose flour. I’ll be honest that I haven’t tried to make a gluten-free variation of this yet, but I assume Bob’s Red Mill 1:1 baking flour would work ok. And lastly, you’ll need water to hydrate the dough.

Vegan cheese: Technically this isn’t needed for a classic Runza, but vegan cheese has come so far and I wanted to do it up! I used Follow Your Heart American, but any cheddar-style vegan cheese will work.

How do you make vegan runzas with cheese?

My adaptation of vegan Runzas with cheese follows the Omaha World-Herald recipe to a T. To make the Runzas, You’ll need a measuring cup, measuring spoons, a large bowl, a small bowl, a whisk, a silicone spatula, a rolling pin, a pizza wheel, a knife, a cutting board, a skillet, and a baking sheet lined with parchment paper.

First, add the yeast, warm water, sugar, and salt in a small bowl (I used a measuring cup), and gently whisk until dissolved. Next, add the flaxseed meal, a tiny bit of water, and some melted, but cooled plant butter.

Next, you’ll transfer the liquid to a large bowl and add the flour. You can use a spatula at first to combine the liquid and then use your hands to form the dough. Once the flour is totally incorporated, cover the bowl with plastic wrap and store in the fridge for four hours.

While the dough chills, you should also chill! Just come back at some point to make the filling. To do that, you’ll need to add the plant beef and onion to a skillet and brown. Then add the cabbage, some additional water, and seasonings, and simmer for 15 to 20 minutes or until the cabbage is soft. If you have to add more water, go for it. Then, taste your filling and add any additional seasonings. The mixture should be hydrated – similar to taco meat.

When you take the dough out, you’ll notice some minimal rising but nothing crazy.  I ended up needing to flour my surface, but you might not need to depending on what you’re working with. Use a rolling pin to flatten the dough into a rectangle and use a pizza cutter to divide the dough into 8 parts. Use the rolling pin again to stretch the dough so it can support the filling and close tightly all the way around.

FIll each slab of dough with vegan cheese (I used ⅔ of a slice for each Runza) and then top with filling. Fold the short sides in and then the long sides. The dough should stick to itself but if it’s too dry, you can add some water and it’ll stick right away.

Bake the vegan Runzas with cheese on a baking sheet lined with parchment paper at 350 degrees for about 20 minutes or until slightly golden. Serve with crinkle-cut fries and it’ll be just like the real thing but better!

Vegan Runzas with cheese are really really delicious but I also have some substitution ideas or things you can do to take it up a notch.

Go gluten-free: Impossible meat is already gluten-free, but you’ll need a handy replacement for flour. I haven’t 100% tried this yet but I think this dough would turn out well with a 1:1 gluten-free baking flour like the one from Bob’s Red Mill.

Add some more spice: Runzas are by nature, kinda plain. Add some more tabasco, a few cloves of garlic, maybe some cumin or thyme to add some more dimension.

Ditch the cheese: I know a lot of vegans who don’t like vegan cheese. If you’re one of them, leave it out and just go for a traditional Runza.

Make a different filling: The base of a traditional Runza is ground beef and cabbage, but even Runza, the restaurant has a ton of different options on their menu. Also I just learned that Runza has a vegetarian option! How cool. Next step vegan!

Pair vegan Runzas with cheese with…

Looking for a side to serve your vegan Runas with? Aside from the classic crinkle-cut fries, I have a few ideas!

In this segment, I suggest a song for you to listen to while you make vegan Runzas with cheese! You can even stream it right here in your browser. Today’s recipe jam is Freest Man by Tilly and the Wall. I have to do a Nebraksa band if I’m sharing a Nebraska recipe, right? 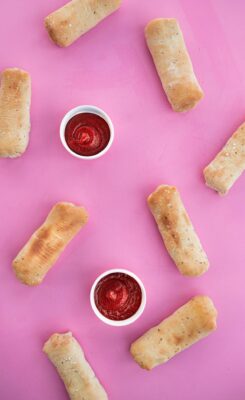