Everyone needs a go-to cashew mac and cheese recipe. I’ve flip-flopped between variations over the years but finally landed on this vegan mac and cheese with cashews recipe that requires minimal ingredients and zero patience.

Why do vegans like to eat food that mimics the “real” thing?

I see this question pop up all the time in Facebook groups, forums, literally everywhere. Meat eaters love to know why vegans and vegetarians try to replicate meals that include animal products. Look, just because we don’t eat animals, doesn’t mean we don’t crave salty, fatty foods. (Check out that sentence with a triple-negative!)

There are a couple of reasons why a vegan might want these foods. The first and most obvious reason to me is that for new vegans transitioning to the lifestyle, having something that tastes like what you used to eat makes the process a lot easier. When I think back to the foods I ate as a vegetarian before I went vegan, I ate a lot of cheese pizza, cheese fries, anything with cheese on it to be honest. Back in 2009 when I stopped eating all animal products, the only cheese around was Follow Your Heart.

Another reason to eat non-animal based versions of the real thing is that a lot of vegans like the taste of meat and dairy. I personally could go either way on some items but there are others that absolutely disgust me. Have you ever heard a person be like, “I could go vegan except for cheese. I. LOVE. CHEESE.” Well, cheese lovers, this cashew mac and cheese recipe will hopefully help fill that void.

The evolution of vegan mac and cheese

Ready for a little history lesson? I’ve been vegan for quite a while. Up until 5-6 years ago cashew mac and cheese wasn’t really a thing. Prior to the cashew approach, folks were making vegan mac with mixing soy milk with nutritional yeast and thickening it with flour. This version of mac and cheese worked fine, but it was pretty thin and not very rich.

In later years came a handful of approaches:

What ingredients are in cashew mac and cheese?

I’ve seen recipes for vegan mac and cheese that call for pages of ingredients. Thankfully, my recipe for mac and cheese with cashews requires 10 ingredients – that’s including the noodles! The first and most obvious ingredient in cashew mac and cheese is of course, cashews. People always make a big deal about soaking them prior to blending, but I’ll be honest with you, for this recipe it doesn’t make much of a difference. In fact, I’d argue that for most recipes, it doesn’t make a difference. Exceptions for this rule would be if you’re making something that isn’t liquidy like a cheesecake or a solid vegan cheese.

Cashews are a really good cheese substitute because they’re super creamy and high in heart-healthy fatty acids. While it’s true that cashews are a great source of good fats, too much of a good thing can turn into a bad thing so if you’re on a fitness or nutrition journey, watch your nut consumption in general. If you’re eating nuts as a snack I’d recommend going with something shelled like pistachios because they take a lot longer to eat and you’ll actually feel full by the time you eat a serving as opposed to popping an entire serving in your mouth at once and then going back for more. Or don’t do what I say! Your body, your rules.

The second most important ingredient in cashew mac and cheese is nutritional yeast. Nooch is a pantry staple for most vegans. It often finds itself as a cheesy additive in sauces and dressings or sprinkled on toast, pizza, or salad. Nutritional yeast is usually fortified with B-12 making it the protein element in cashew mac & cheese.

The next ingredient is one that may surprise you: miso. My friend Samantha turned me onto putting miso in mac and cheese sauce and my life hasn’t been the same since. So thank you Samm! Miso adds an extra layer of umami that nutritional yeast can’t quite pull off and also adds some salt flavoring to the mix.

Other than cashews, nutritional yeast and miso, the rest of the ingredients in this vegan mac and cheese include minced garlic, turmeric, salt, mustard powder, and onion powder. That’s pretty much it! Oh yeah, you’ve gotta have some water too, otherwise, it won’t blend. Small note on the water: if you have unsweetened non-dairy milk lying around feel free to try it out but I rarely have it in my house, and if I do, I’ll only use it for one recipe and then the rest goes to waste so I just use water. In 75% of all recipe scenarios, it works out just fine.

How to make cashew mac and cheese

Ready for some good news? Cashew mac and cheese is probably the easiest recipe on this website. First, boil the noodles. Second, while the noodles cook, blend all of the cashew cheese sauce ingredients. Lastly, drain noodles, return to pan, add cashew cheese sauce, and serve. Can’t get much easier than that, right?

You’ll probably find in recipes to come that I love to throw things on top of my cashew mac and cheese. I’m finalizing a recipe for green tomatillo salsa that I’ll cook in jackfruit and then add on top of cashew mac. Adding BBQ chickwheat on top is also a good approach. Alternatively, red pepper flakes add a nice finishing touch. Oh yeah one more thing – growing up my cousins would always put seasoned salt on top of their mac and cheese and while it’s not in the photo, it’s something I still do to this day, so If you haven’t tried it, please do yourself a favor and break out the Lawry’s.

In this segment, I suggest a song for you to listen to while you make cashew mac and cheese! You can even stream it right here in your browser. Today’s Recipe Jam is Drop You by Sextile. 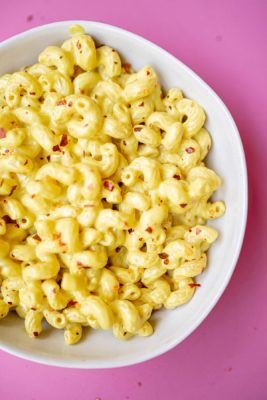